Mr. Dominic Cummings cites Research by Prof. RI Sujith, which uses analytics to detect transitions that lead to failure in engineering systems such as gas turbine engines, with applications in financial markets to sudden failure of vital organs 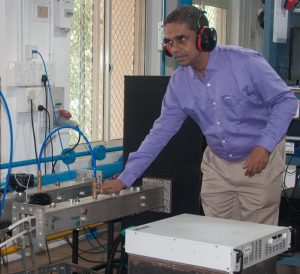 Lead Researcher Prof RI Sujith, Dept of Aerospace Engineering, working on a ‘Rijke Tube’ at his lab in IIT Madras.

Published in the reputed peer-reviewed international journal Scientific Reports of Nature, the research paper titled ‘Early warning signals for critical transitions in a thermoacoustic system’ was the first research cited by Mr. Dominic Cummings in his blog. The Research paper looked at early warning systems in physics that could be applied to other areas from finance to epidemics.

Mr. Dominic Cummings substantiates his stand for applying these novel technologies for a nation’s strategy building exercise. He hopes to create a set of experts consisting of Physicists, Mathematicians and Data Scientists to deal with the major social and economic issues of UK.

Highlighting the applications envisaged in this research, Dr. R.I. Sujith, the lead researcher and Chair Professor, Department of Aerospace Engineering, IIT Madras, said, “We used analytics to detect transitions that lead to failure in engineering systems such as gas turbine engines. Other applications which we envisaged were the transitions that happen in financial markets, instabilities in power grids leading to blackout and sudden failure of vital organs in the human body.”

Further, Dr. Sujith said, “It is very heartening to see the open-mindedness and courage shown by a country such as the U.K. to embrace the cutting-edge tools from physics and mathematics. We believe that this will open up a lot of opportunities for the young talent in the world and we are really happy to be a part of this exciting scientific exploration. We are of the firm opinion that we can avail such technologies in India also to improve our socio-economical systems.”

The problem statement the researchers looked at was that many complex systems such as stock markets, climate systems, human body and neurons in the mammalian brain exhibit sudden change in their qualitative behaviour by transiting into an alternate state termed as ‘tipping.’ The alternate state to which the system transits need not always be desirable as in the case of a stock market crash, extinction of a species in an ecosystem, sudden collapse of a healthy human being so on and so forth. This catastrophic nature of tipping demands the development of precursory measures which will forewarn these impending transitions.

In this paper, the Researchers investigated the efficacy of early warning measures based on ‘critical slowing down,’ where the system responds slowly to the perturbations as the system approaches transition.

In such complex systems, before a catastrophic event takes place, the system (be it  any complex system such as ecological or physiological or economic or engineering system) gives indications of the impending transition. If these signals can be detected early enough, before the system hits a tipping point, initiating appropriate management strategies become feasible.

Prof RI Sujith added, “Take for instance a complex system such as the earth’s climate. We would start seeing a lot of variability in the climate in an extreme manner. Many temperature records may be broken as a threshold for climatic change is approaching. We will start running into the hottest summers, coldest winders, wettest rains and driest droughts. Sahara Desert, which was once having a thick vegetation is now a desert, which implies that a critical transition occurred. Extreme fluctuations are observed in other areas such a finance, epidemics etc., which are complex systems. And similar events indeed happen in thermoacoustic systems before critical transitions occur.”

Over the years, many early warning measures were developed to detect such critical transitions. However, these measures are often tested only in mathematical models and not in real physical systems. Testing these measures in physical systems is the only way in which we can find out if they really work. Such testing is very critical to establish the reliability and robustness of early warning signals (known in the community as EWS).

The study was funded by the Office of Naval Research Global (ONRG, USA), as thermoacoustic systems are good test beds for testing out tools such as EWS for analyzing complex systems.

Indian Institute of Technology Madras (IITM) was established in 1959 by the Government of India as an institute of national importance. The activities of the Institute in various fields of Technology and Science are carried out in 16 academic departments and several advanced interdisciplinary Research Academic Centres. The Institute offers undergraduate and post – graduate programmes leading to the B.Tech., M.Sc., M.B.A., M.Tech., M.S., and Ph.D., degrees in a variety of specialisations. IITM is a residential institute with more than 580 faculty and 9,500 students. Students from 18 countries are enrolled here. IITM fosters an active entrepreneurial culture with strong curricular support and through the IITM Incubation Cell.

IITM has been ranked No.1 in the Overall Institutions category in India Rankings 2019 released by National Institutional Ranking Framework, Ministry of Human Resources Development, Govt. of India. The Institute has also been ranked No.1 in the Engineering Institutions category in the same Rankings for four consecutive years – 2016, 2017, 2018 and 2019. It was also adjudged as the ‘Top innovative Institution’ in the country in the Atal Ranking of Institutions on Innovation Achievements (ARIIA) 2019 launched by Innovation Cell of MHRD.